Previously, the admission schedule of UET was linked with declaration of second year Intermediate result by the Boards of Intermediate and Secondary Education (BISEs)

This delayed the admission process as compared to other competing engineering institutions that offer admission based on Intermediate Part 1 result. Moreover, these institutions also charge heavy admission and tuition fees without waiting for Intermediate Part II Result. As a consequence, a candidate who has been admitted in any such institute and subsequently earns admission in UET Lahore faces a major financial loss due to the refund policy currently in vogue. So, many interested students willing to get admissions in UET are not be able to do so.

The statistical analysis carried out by the University for the past few years also showed that first-year and second-year marks are positively correlated with the final intermediate marks, keeping these facts in view and after detailed deliberation on the matter, the Academic Council of the University in its 221st meeting held on 15th January 2020 recommended and Syndicate in its 1/2020 meeting held on 29th February and 5th March 2020 approved “Undergraduate Admission Policy 2020” for UET Lahore. This policy enables UET Lahore to grant admission based on marks in Entry Test, Matric, and Intermediate 1st year (or O level).

Another major changes are made in Admissions aggregate policy. Previously, UET aggregate constituted 70% weightage for Intermediate Marks(FSc, ICS) and 30% for Entrance Test, ECAT. But now Matriculation marks weightage has been added. So the new aggregate will based on

The detailed description of notification issued regarding its admission policy 2020 is under : 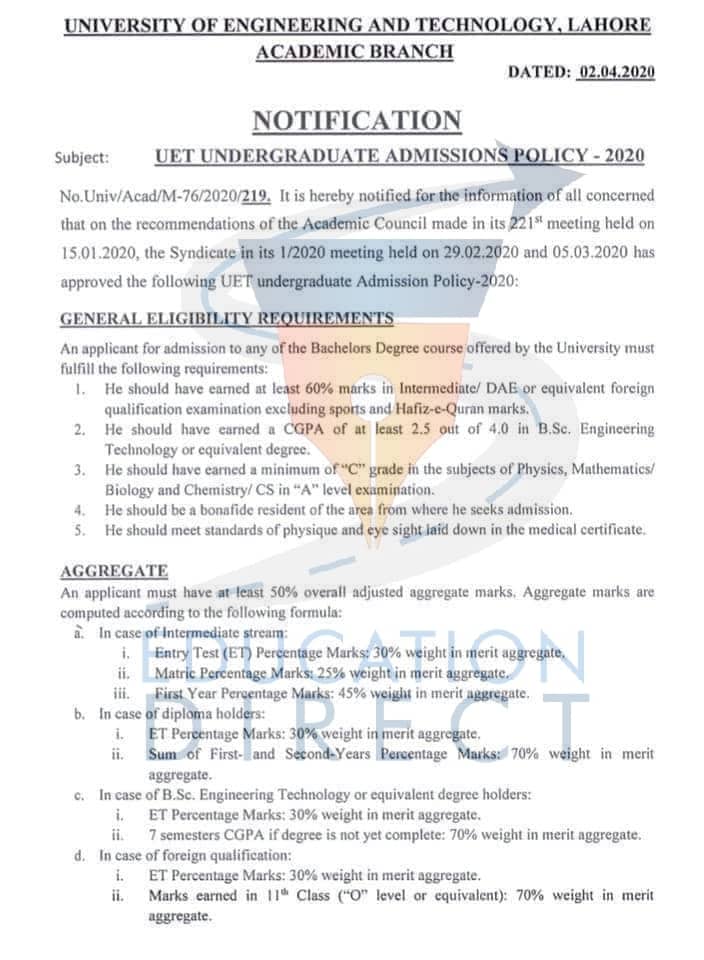 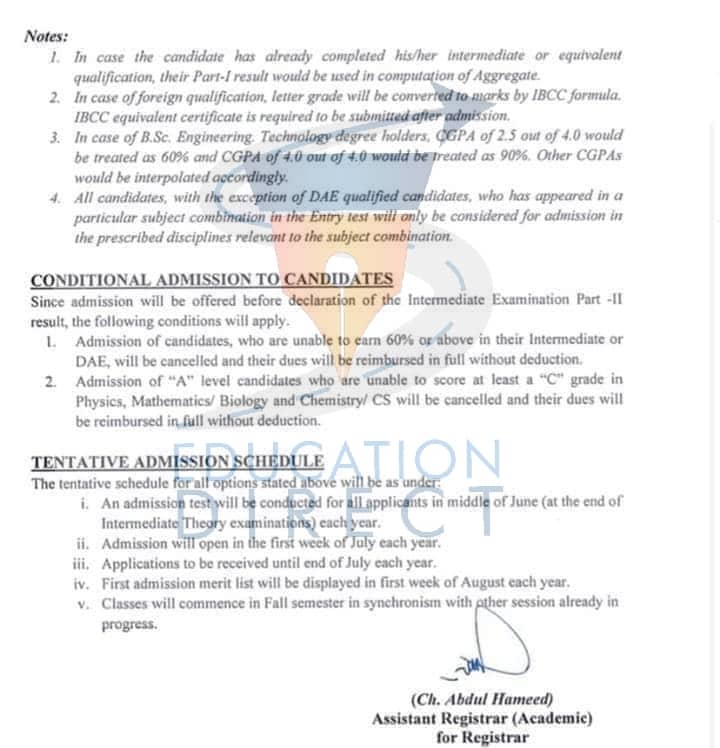 However, for the first time in the history of the University, the UET Entry Test will be held online this year, immediately at the end of Intermediate Theory Examinations of second-year. In this regard, the University has signed an MoU with Virtual University of Pakistan to conduct the Entry Test at the designated VU Campuses in Punjab.

The University believes that the decisions of early admissions and online test will facilitate the candidates in the Entry Test and provide them a level playing field in choosing the engineering institution of their choice. This will particularly help the candidates belonging to lower and lower middle class families. The colleges and institutes affiliated with UET Lahore will also follow the same admission policy.